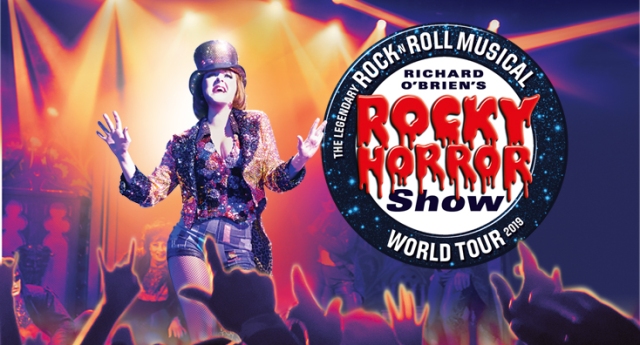 Now in its 46th Year, The Rocky Horror Show shows no sign of slowing down, or losing its edge. Few shows have the audacity to use their best song as the opening number. Yet that is what happens here. The beginning front of curtain “Science Fiction, Double Feature”, sung plaintively and beautifully by Laura Harrison as the usherette, sets a standard which never slips for the next two hours. The live band, situated in partial view in an upper gallery of the set, plays loud and clear. This is a rock musical.
I have seen the show several times over the years. I have never seen it sung better. Lead character Frank N Furter has been memorably played in different ways by various luminaries. Duncan James gives the part an aggression, sexually, and vocally, which I have not seen or heard by others in the role which he dominates quite brilliantly.
The set, designed by Hugh Durrant, is revamped, but the essential ingredients remain, a kitsch castle, a 1950’s ruched stage curtain, and THAT upright bed. A banner like reel of film hangs above the stage to remind us that the show is a glorious pastiche of those post war science fiction films whose ambition always exceeded their budget.

Hapless couple Brad and Janet are convincingly played by Ben Adams and Joanne Clifton. The latter not only carries the white bra and petticoats look convincingly, but reveals also that she  is an accomplished dancer She  sings powerfully too alongside her vocally accomplished partner.

The show is written to provide an opportunity for the Narrator to be played by different actors in different towns. For the fortnight in Birmingham, local girl Alison Hammond takes the billing. Her ebullience and effervescence make her a natural for the role. As soon as she sets foot on stage she received a hero’s welcome from the crowd, steadying her first night nerves, and conspicuously revelled in her performance and the rehearsed and adlibbed heckles from the audience.

A Castle in the middle of nowhere-what could go wrong?

Although I believe “Science Fiction, Double Feature” to be the best song of the night, inevitably “Time Warp” is the most loved, best known, and most eagerly anticipated , so good they perform it in each half. Choreographer Nathan M Wright has excelled in maintaining the signature moves, whilst giving the set piece production a sharpness and snappiness which extends across all the stage movement.

Unlike any other show the audience is part of the proceedings. It is heart-warming to see the vintage stalwarts now in their 50’s and 60’s, supported in equal number by young people in their 20’s and 30’s. Stockings and suspenders, corsets and garish make up abounded amongst men , women and theatre staff giving the evening a real sense of occasion. It is an excuse to turn up and show out for everyone. Over the years the audience heckles have become part of the show with the cast pausing to hear them, never quite sure whether they will be the traditional ones, or new ones, keeping everyone on their toes as a result.

If you have seen the “Rocky Horror Show” before come and see it again for a fresh, vibrant take, full of vim and life, not least to appreciate Duncan James’ performance. If you have not been before, you will not be disappointed for a run which continues until 25th May and continues on nationwide tour.

This entry was posted in Behind the Arras Reviews and tagged rocky horror show, time warp. Bookmark the permalink.