“Not Now Darling” is a 1967 farce written by English playwrights John Chapman and Ray Cooney, first staged at the Richmond Theatre, in Richmond, London, prior to a long West End run. It is  the tenth play penned by Cooney in an illustrious career.It follows the misadventures of insatiable womaniser Gilbert Bodley in an upmarket London Furriers.
Fifty one years on, inevitably, comedy has shifted. Cooney learned his craft as an actor in Brian Rix’s farces, a tradition carried on today by Torben Betts, who has worked under Alan Ayckbourn, who in turn had worked under Rix. The lineage is formidable. The danger is that the formula has outlived its usefulness. If written today, this  farce would have no hope of making it to the West End ,or to Broadway (as it did then), because it is just about as politically incorrect as you could imagine. Arch feminists and anti-fur campaigners would be in a state of apoplexy. Its short run on Broadway, just twenty one performances, is easy to explain. Its quirky Britishness gives it its appeal, and its limitations. 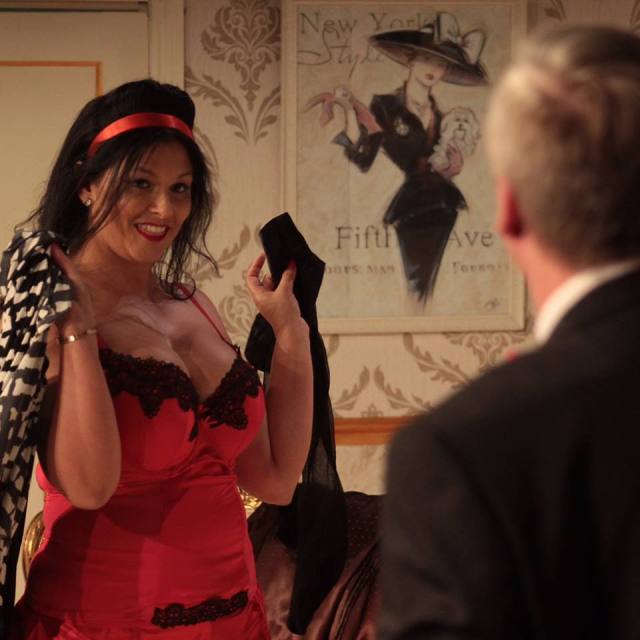 The audience was largely the one that would have been around in the 1970’s, it is also one which supports amateur theatre, which is why these farces are put on. Whether the genre can skip a generation will depend upon how effective the likes of Torben Betts are in reinventing the formula.

Fortunately, veteran Director Barrie Atchison is on hand to wrest the maximum out of the script, playing to the play’s period strengths, and not pandering to modern sensibilities. The action moves along briskly, visually there  are lashings of sauce, but no smut, and the physical gags are well acted out. It is an object lesson in producing a farce onstage.

That means plenty of pretty girls in their underwear celebrating a traditional British bawdiness with structural complication, as characters leap to assumptions, are forced to pretend to be things that they are not, and often talk at cross-purposes.  Harriet Harman was not in the audience on opening night.

Drinking, and remembering which girl is in which cupboard, is not easy

Dexter Whitehead as Arnold Crouch,and Gary Pritchard as Gilbert Bodley, lead  as co- West End fur salon owners, with an unusually strong supporting cast bringing eleven people on stage in total. The action pivots around a fur coat  intended  for Bodley’s mistress, which along with other items of female apparel, are defenestrated with great regularity, much to the bemusement of the staff on the ground floor and passengers on the No 9 bus. Whitehead captures a sense of innocent haplessness with great comic assurance, Pritchard’s swaggering Lothario-like persona unravels with delightful despair.

Richard Clarke plays Harry McMichael with impatient suspicion, while his wife Janie, entertainingly played by Angelique Runnalls -Bould, has all the fun as mistress to Bodley, displaying her shapely figure , as Gilbert’s cash figures unravel.

Elena Serafinas  gives a brief, classy performance, as Bodley’s wife, arriving back from a holiday where she has not been enjoying the sun alone. Indeed it is the men who end up looking foolish, the women who come out on top.

The genre demands slamming doors, and girls secreted in cupboards, “Not Now Darling” does not fail to disappoint in this regard.

Arnold Crouch upon realising that the phrase “All fur coat and no knickers” is not metaphorical in this instance.

However the real star of the show does not say a single word. It is the set. John Islip and his team have excelled themselves, producing a beautifully presented, and appointed, Furriers salon, balcony with London street scene, and, naturally, capacious cupboards.

Mr & Mrs Bodley, with secrets as yet unrevealed

Amidst the Marx Brothers style mayhem, Louise Farmer, as Miss Tipdale, keeps her clothes on, and attempts to make some sense of the chaos around her with a smile. Maureen George and Phil Shaw are a delight as Commander and Mrs Frencham, the latter worrying about having sixpences for parking, the former amazed at his wife’s reported new found libido.

Miss Tipdale makes a note of the replacement clothing required for the women onstage – it is a long list.

All the players find their stride in the second act when the script and misunderstandings come to a head.

This production is a lot of fun, a couple of hours of gentle escapism, laughs and giggles, delivered with zest, commitment, enthusiasm and discipline. All involved should feel proud. The full house on the opening night showed their approval with warm and generous applause at the final curtain, the cast looking out with deserved satisfaction. Runs until Saturday 12th May. 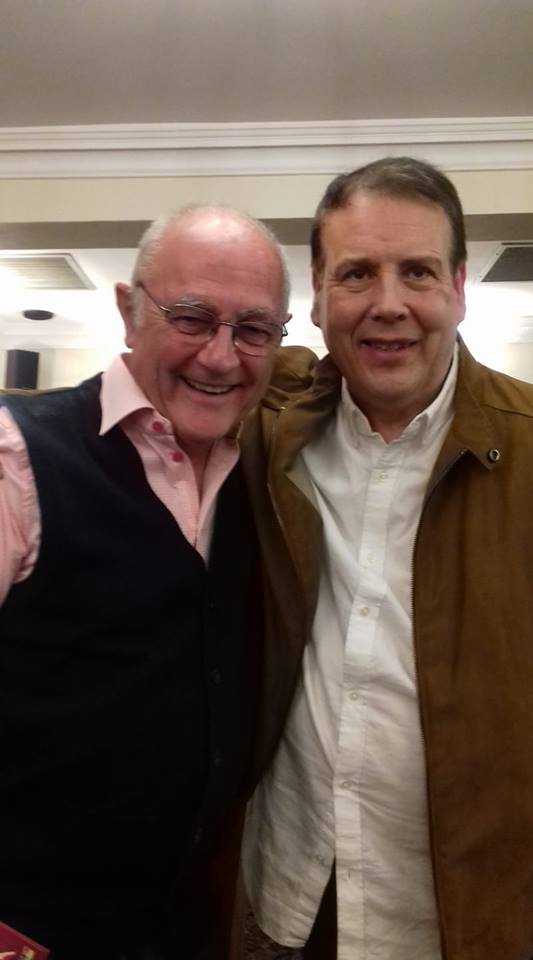