Posted on February 9, 2018 by garylongden

Derby Theatre is putting on “Two”, by Jim Cartwright, between 2nd- 24th March. It is a play beloved of drama students and teachers, one play, two actors, fourteen characters. It is also a difficult show to pull of convincingly. As a rite of passage for an actor it is fine, but if the two actors fall short of their Herculean task, the results can be patchy and disappointing. 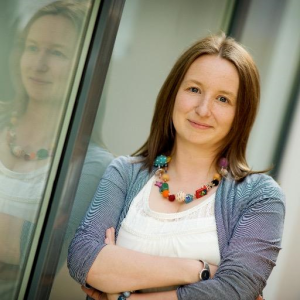 Fortunately, Derby Theatre do not tend to do “patchy and disappointing”.Firstly, Sarah Brigham, one of the finest Directors in the country, is in the chair, devising the production, Julia Thomas Directs. Secondly, even in advance of the show, she is experimenting and innovating. A limited number of audience seats will be on the stage in the pub, and the pub will not only be serving beer, but a specially brewed beer by local brewer Dancing Duck, called “Dramatic Duck” a 4.1% hoppy pale ale.

The two actors charged with bringing the fourteen characters to life have been shrewdly chosen.
Jo Mousely is best known for her TV work on Coronation St and Emmerdale, her stage work includes performing in “Brassed Off” which was widely hailed as one of the finest productions ever to grace the Derby stage.

Sean McKenzie lives in Derbyshire. On TV he has appeared in Emmerdale and Downton Abbey, on the stage he has performed with the National theatre in “The Curious Incident of the Dog in the Night” and “War Horse”
The play itself is described as; “ hilarious, yet heart-breaking, and presents a slice of working-class life in a Northern local pub in the 1980s through a constantly quarrelling husband and wife landlord and landlady team, and the dozen regulars who pass through their pub in an evening; a place of failed aspirations and unfulfilled lives. All life is present in this pub, and through this range of colourful characters, the rich tapestry of their interconnecting lives is revealed; it is the heart of communities, it is where people laugh, share stories, celebrate and mourn. With the fragile relationship of our less than cordial hosts at breaking point, a rollercoaster of emotions unfolds. ”

Multi-award winning playwright Jim Cartwright has written extensively for stage, television and radio, with some fifteen plays and eight films to his credit. Born in Farnworth, Lancashire. Cartwright’s first play, Road, won a number of awards before being adapted for TV and broadcast by the BBC. His work has been translated into more than 35 languages.