Posted on October 9, 2017 by garylongden 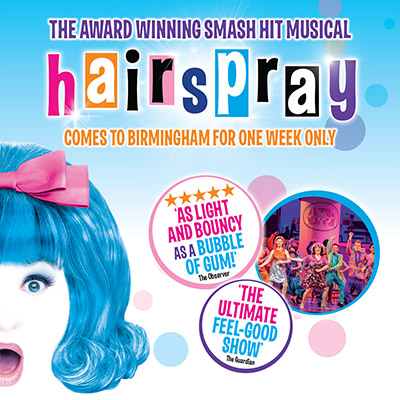 *****
This show is beguilingly deceptive. Its title implies froth and artificial glamour, yet when heated, hairspray can be explosive. Marc Shaiman and Scott Wittman’s adaptation of John Waters’ 1988 film for stage was itself based on the book by Mark O’Donnell and Thomas Meehan. First appearing on Broadway in 2002, it is both glitzy and gutsy. Stage adaptations of films have a chequered history, this is a rarity, an incarnation which is more powerful on the boards than on the screen.

There is a political message. That can be good in offering substance to a show, but it can also date it. Fortunately, and sadly, the themes of casual racism and mistrust of immigrants were a feature of the Brexit debate, and legislature corruption dominated the US Presidential Trump v Clinton battle, offering a contemporary dimension to the original screenplay. “Hairspray” focusses on the integration debate in early 1960’s America, body image, and how outsiders fit into mainstream society. But this is no dour, didactic dirge. Instead it is a celebration of diversity, hope, and the talent of youth .

Resident Director and choreographer Lindsay McAllister has managed to successfully tiptoe along the tightrope of delivering a show which musically fairly fizzles with high octane effervescence, whilst retaining the integrity of playing out a dramatization of the Civil Rights struggle in America. A brash, clever set nicely reflects the time and place. Takis earns his corn as set and costume designer, producing a riot of colour and flared dresses. The costumes are as much a star of the show as the actors boasting an operatic look, a cut above simple sixties kitsch

Rebecca Mendoza, taking the lead role of Tracy Turnblad, blazed into the opening number “Good Morning Baltimore”, and never looked back. It was as if she, and the cast had plugged themselves into the mains electricity socket. This role is her professional debut and Rebecca is superb in the role, offering a powerful vocal and a commanding stage presence. Yet she isn’t all front. Her love interest with Link Larkin is nuanced and believable, helped considerably by Edward Chitticks’ assured vocals and charisma.
Gina Murray, as producer and scheming mother Velma Von Tussell, comes close to stealing the show. She specialises in a withering glare that could turn milk sour, ostentatiously enjoying her role as villain of the show, injecting a healthy dose of Cruella De Ville into her character.

The musical score is fabulous featuring 1960s-style dance music and “downtown” rhythm and blues, played by a live onstage band under the musical direction of Ben Atkinson. Not skimping on musicians by using a pre- recorded sound track makes such a difference. All the vocalists, without exception, rose to the occasion, none more so than Miss Motormouth (Brenda Edwards) whose spoken rhyming couplets morphed into a huge interpretation of signature ballad “ I Know Where I’ve Been” sending tingle down the nape of my neck. She is a talent who has developed far beyond her X Factor appearances.

Tracy Turnblad’s parents have almost as much fun as the audience as a sparkling comedy duo. Norman Pace ( of Hale & Pace) gives a masterclass in timing and facial expression, while Matt Rixon appears in drag, breathing fresh life into the “man- in- a -dress” gag in a little and large pairing .Both come together for a very well received duet, “You’re Timeless to Me”.

A compelling part of this show’s success is McAllister’s choreography. There are no back line shirkers, the shapes, footwork and movement are a delight, and she shows commendable discipline in not flooding the stage with chorus unnecessarily. Inevitably, she works “You Can’t Stop the Beat” until it is wrung dry, and why not? It is a great song, with unusually satisfying lyrics, the performance of which demands, and receives, a deserved standing ovation at its close.

Amidst the infectious song and dance a witty, and occasionally risqué, script is brought to life by the cast with some great lines, my favourite being from Velma ;“ It pays to have a politician in your pocket and a polaroid in your safe”.

This is an exuberant slice of musical theatre, beautiful to look at, kind on the ear, and with a big smile on its face. Runs till Sat 14th Oct.

This entry was posted in Behind the Arras Reviews and tagged gareth hale, hairspray, you cant stop the beat. Bookmark the permalink.