An elite clutch of theatrical productions have a momentum of their own, selling out houses- because they do. Blood Brothers is one such production filling the Grand on a late autumnal Monday night. The audience was encouragingly mixed with a strong younger element evidence that its appeal transcends the tribal cognoscenti of its era, and its themes still attract across the generations.

The big names are Marti Pellow as the narrator, and Maureen Nolan as Mrs Johnstone. The Nolan sisters have secured a virtual sisterly hegemony on the role, with Maureen the fourth sister to have worn Mrs Johnstone’s pinafore. She plays her with warmth, energy, humour and pathos. Narrator Pellow watches from the shadows, as sinister as a Crocky chancer, but without the consistency of accent. The role is fairly one dimensional with occasional undemanding harmony parts, he will be able to undertake his new year’s Wet Wet Wet gigs with no fear of exhaustion. His speaking parts are delivered as rhyming couplets in the tradition of the Chorus in Greek tragedy. And so it unfolds:

“So did y’ hear the story
Of the Johnstone twins?
As like each other as two new pins
Of one womb born, on the self -same day,
How one was kept and one given away?”

The single street set is impressive and evocative of its era. Was the Everton slogan on the wall spray painted by Toffees chairman and show Director Bill Kenwright himself? If not, at the very least ,he will have allowed himself a smile.

Although Nolan and Pellow acquit themselves with credit, it is the supporting cast who shine. Sean Jones and Joel Benedict play the twins as children and young adults, a formidable task with huge, well-realised, comic possibilities. Danielle Corlass is delightfully leggy as the twins’ love interest and Paula Tappenden delivers an unhinged Mrs Lyons, the illegal adopting mother with compelling conviction.

The first act’s appeal is its faithful recreation of happy family life, soon to be destroyed:

“And who’d dare tell the lambs in Spring
What fate the later seasons bring?”

The second act, which after an opening that on the night fizzled and crackled, rather than burned, shifts gears rapidly for its destructive climax.

Although a musical, it is the story and characterisation which are the stars. There is only one memorable song “Light Romance” ,sensitively sung by Maureen Nolan, the rest is incidental, “Tell Me It’s Not True”, the best known song, is little more than a repeated refrain. But the themes of brotherhood, adolescence, motherhood, and hard times are memorably created and exploited by author Willy Russell. Although proudly set in Liverpool, the bleak urban landscape will have been familiar to the Wolverhampton audience.

The sound was a little thin from the modest orchestra, and it struck me that the part of the narrator need not be a “name” thereby saving some money which might better be put into a more full sound.

At the end, the narrator laments:

“Did you ever hear the story of the Johnstone twins?
As like each other as two new pins
How one was kept and one given away
How they were born, and they died,
On the self- same day” 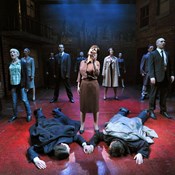 A tragedy laid bare at the opening scene, which the rest of the play then leads up to. Yet on the way, the good humour, laughs and humanity of the story ensure that this is a tale of upliftment, rather than despair. Blood Brothers runs till Saturday 31st October.

This review first appeared in Behind the Arras, abridged, where a comprehensive collection of reviews from the best of Midlands theatre from a range of reviewers is available.
http://www.behindthearras.com/

This entry was posted in Behind the Arras Reviews and tagged bill kenwright, blood brothers, marti pellow, maureen nolan. Bookmark the permalink.