“Hansel and Gretel” is a Märchenoper (fairy tale opera) by nineteenth-century composer Engelbert Humperdinck, based on the eponymous Grimm brothers’ fairy tale . The first four rows of the stalls at the Hippodrome had been removed to accommodate a full orchestra in a pit packed with musicians, and burgeoning with the sounds of the rich score, a Strauss influence noticeably present. What a delight to have a full orchestra playing for a change at Opera.

The Grimm brothers fairy tale is grotesque and macabre, this production does those values full justice. Gretel (Ailish Tynan ) and Hansel (Jurgita Adamonyté) lead the production playing children with no awkwardness, the latters’ mezzo soprano a delight, their combination oozing innocence and adventure.

The set opens, stark and austere and ends in an industrial kitchen with a finale so grotesque, that Quentin Tarantino would have hesitated to pitch it for one of his films. Director Richard Jones’s vision is ambitious, and delivered. Conductor Lothar Koenigs leads the magnificent orchestra to produce a light, sensitive nuanced tone against a bleak backdrop, from which the twee rustic idyll of other productions has been stripped. 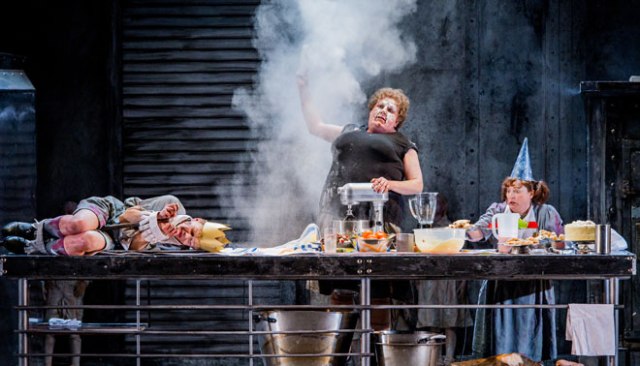 Adrian Thompson’s witch is a winning comic vision, twerking, smirking and luring before her demise, an end which is gross out humour at its basest. However the most accomplished and complete scene was the “Abendsegen” (“Evening Benediction”) from act 2. The melody has a child like simplicity, the Wagnerian harmonies soar, and for a moment you are transported to church and back to your own childhood where an evening prayer can fend off bad dreams.

Elsewhere the set pieces are presented in some style. Actors lurk dressed as trees, a banquet is served by a fish and fat headed chefs while The Sandman (Meriel Andrew) stalks a banquet table, caressing a skeletal spectre.

This is a magnificent production and a timely reminder of how good composer Engelbert Humperdink was. Gluttony, greed, self indulgence and excess are all gloriously explored, a triumph for the Welsh National Opera.

It tours until 11 April alongside performances of “The Magic Flute” and “Chorus”, a greatest opera hits production.

This entry was posted in Behind the Arras Reviews and tagged engelbert humperdink, hansel and gretel, WNO. Bookmark the permalink.