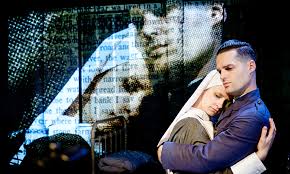 An adaptation of Ernest Hemingway’s novel by innovative theatre group Imitating the Dog. The play is a multi-media, multi lingual, experience with cameras on stage and prose projected everywhere; It tells the story of American Frederic Henry, serving as a Lieutenant in the ambulance corps of the Italian Army and his love affair with British nurse Catherine Barkley against the backdrop of the First World War. Written some eighty five years ago, its staging coincides with the interest surrounding the centenary of the First World War,extensive use is made of surtitles when the dialogue is in Italian.

The opening is attention grabbing and compelling as a group of readers break into the set and convert into the players. A cast of six are kept busy. Laura Atherton (Catherine) and Jude Monk McGowan (Frederic) as principles remain in character, but the supporting cast of Joshua Johnson, Morven Macbeth, Matt Prendergas and Marco Rossi play multiple roles including narration. Andrew Quick and Peter Brooks have adapted and direct proceedings which are multi-dimensional, and at times technologically frenetic. The set, designed by Laura Hopkins, is sparse , invoking the sense of both a television studio and hospital ward . Simon Wainwright dominates proceedings with his video work. Steven Jackson’s impressive background music is augmented by original contributions from Jeremy Peyton-Jones with occasional piano contributions, the latter of which I found somewhat intrusive. Andrew Crofts as lighting designer will have had a few afternoons off, choosing a simple white light set from two stage side gantries.

Catherine’s labour is unnecessarily laboured, but the use of a chorus to articulate her thoughts as she gets on with the business end of proceedings is clever , moving, and effective. Full use of technology portrays the moment when Frederic is injured in battle in gruelling, painful and visceral style, and in the first act, a memorable scene unfolds as Catherine and Frederic speak to camera away from the audience with their images projected onto hospital modesty screens. Yet too often the camera work seems to slow things down and detach the characters from the audience. Would the play have been better without them? Jude Monk McGowan is well cast as Frederic, but the script offers Laura Atherton little room for manoeuvre as his love interest damaging her credibility both as a nurse and seductress.

As a love story it convinces, particularly in the second half, with the dehumanizing cynical backcloth of war omnipresent. The technology will divide opinion, at times it is very effective, on other occasions it feels as if it was used simply because it was there, rather than to enhance the dramatic experience.

A Farewell to Arms continues until 22nd November at the Rep as part of an ongoing tour.

This entry was posted in Behind the Arras Reviews and tagged a farewell to arms, ernest hemmingway, imitating the dog, laura atherton. Bookmark the permalink.