The Ladykillers is a stage adaptation written by Graham Linehan based on the Ealing comedy film of the same name which premièred at the Liverpool Playhouse in November 2011. Only just released for amateur performance, the Grange Players are fortunate to have secured the rights so early for a production which is much in demand by amateur companies. It is based on the well-known and much-loved 1955 film of the same title – one of the famous Ealing Comedies. Linehan found fame as a scriptwriter for Father Ted, the IT Crowd and Brass Eye, his writing packs a contemporary punch whilst being affectionate to the Ealing tradition.

The raw plot is anything but comic, but the writing is. A gang of thugs, posing as musicians rent a room in a house, stage a security van robbery, then hole up in the house and draw lots as to who is to kill the old lady who rumbles their plot, and the body count mounts. Tarantino would approve. However the house they have chosen belongs to a batty old widow, Mrs Wilberforce, who lives alone apart from her deformed parrot battling a degenerative disease.

An impressive and complex set, designed by Martin Groves, is a delight, skewed and ramshackle beside the King’s Cross mainline, and springs ingenious surprises throughout the show, providing a platform for a string of inventive sight gags and physical theatre tricks.

Mary Whitehouse, playing Mrs Wilberforce, is the star of the show. Some time dotty old bird, other times as sharp as a tack. Mary offers warmth, comedy and all round entertainment in an engaging package which carries the show, always hinting at the possibility that she might not be quite so daft as she appears. Opposite her, Dexter Whitehead as Professor Marcus is a worthy adversary. Flamboyant and devious his ingenuity is continually thwarted by awkward picture hanging and Mrs Wilberforce’s careless feet.

The rest of his criminal gang might not be first choice for a Quentin Tarantino team. Al Barzdo’s nervy, cross dressing Major Courtney is a wonderful vignette, as is Rod Bissett’s pill popping Harry Robinson. Playing a buffoon is not as easy as it seems, timing is all, but Joseph Hicklin carries it off with ease as One Round. The team’s enforcer, Christopher Waters as Louis Harvey offers the menace that laced the film, yet touchingly swerves killing old ladies.

There are many hilarious moments, most notably when the non -musicians find themselves having to give a musical recital. “Being fooled by art is one of the primary pleasures afforded to the middle classes,” declares Professor Marcus, as his quintet perform to a gaggle of visiting ladies whose dresses suit to wildly varying degrees!

Les Wilkes , as Constable MacDonald, pleasingly bookends the play with dry aplomb and some contemporary references to Scotland and the Middle East to boot. Indeed in a week when the whole concept of being British is being debated Ladykillers is a satisfying slice of Britishness, awash with quick-fire wit and tea at all times. 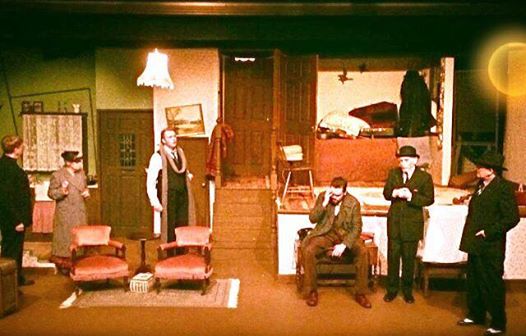 Special mention should be made of Rosemary Manjunath, Director, Producer, set assistant, Costume Mistress, properties assistant, head of Box Office and front of house hostess ( and those are just the jobs she admits to!). Her hard work , dedication and commitment are an impressive thread throughout the whole of a tremendous show of which she, and her cast, should be enormously proud . Ladykillers runs until Saturday 20th September.

This entry was posted in Behind the Arras Reviews and tagged Ealing Comedy, Grange Players, The Ladykillers. Bookmark the permalink.