This is the 25th anniversary tour of a show which celebrates the songs of an artist whose recording career lasted barely two years, but whose music endures. A jukebox musical, the two halves mainly comprise his rise to fame and studio work in the first half, and an extended concert sequence in the second.

Glen Joseph took the eponymous role in this performance which is shared on the tour with Roger Rowley, who plays guitar in the band. Angular and enthusiastic, Joseph is credible and lively, Rowley provides formidable back up on second guitar. In all Joseph has ten supporting musicians and singers, a luxury which Buddy Holly never had, providing a full, sumptuous and authentic sound.

The plot fairly thinly joins the dots between the musical numbers, but does not shirk the casual misogyny and more pernicious racism which was abroad at the time. The Hippodrome is a magnificent theatre and provided a fitting showcase for a talented cast. Amongst numerous satisfying cameos, Vivienne Smith shone as Maria Elena, a Hayrider, a Snowbird, and violinist. She also wore the best dress of the night, in beautiful cream, with pleated skirt, in a show which is particularly well costumed. 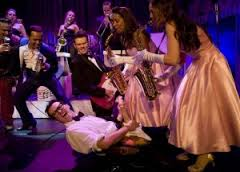 The Hippodrome’s voluminous stage was well suited to a set which incorporates recording studios, concert halls, radio stations, and living space and provided a sense of occasion as the theatre stage became a concert stage.

There is no secret to this show’s success and longevity, the songs are very strong. A stripped down “Everyday” is the highlight of the first half, “Rave On” the raucous star of the second. Contemporary hits “Shout” , “ La Bamba” and “Johnny B Goode” flesh out the musical numbers offering variety, shade and musical context.

British audiences are satisfyingly frugal with offering standing ovations, but all felt obliged to do so for the finale, a deserved acknowledgement of a fine show, well produced and performed. Buddy runs until 28th June and then continues its nationwide tour.

This entry was posted in Behind the Arras Reviews and tagged Buddy, glen joseph, roger rowley, vivienne smith. Bookmark the permalink.