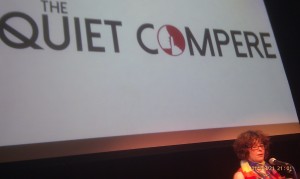 Those involved in performing poetry, and attending such events, invariably demonstrate qualities which make them a joy to be involved with. The Quiet Compere roadshow exemplified this, poet and troubadour Sarah L Dixon has a mission to take poetry around the north ( Birmingham just crept in geographically) inviting a diverse roster of talent to play their words, and an audience to appreciate them. And so an eclectic mix of performers gathered in front of an audience rich in bonhomie, attentiveness and goodwill. The hall itself was nothing short of perfect, a mini amphitheatre with steep tiered seating, a projected backdrop, and excellent amplification and acoustics. 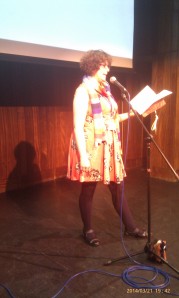 Sarah L Dixon lived up to her soubriquet, performing a handful of poems herself, one about frozen peas, and introducing the poets by name only, allowing the poets to reveal themselves in performance.

Ruth Stacey’s poems were layered, begging to be read again, the raw eroticism of her bear poem hidden by a fairytale like veneer.

Laura Yates’ past has involved supporting the poetry of others, now she is evolving into a fine performer herself having assimilated what works and what doesn’t from others. She recited just two pieces, the second, a tour de force about Birmingham which left us wanting so much more. 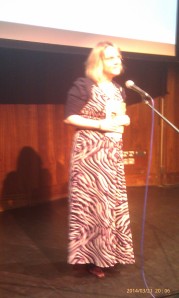 Sarah James is an accomplished published poet whose hallmark is economic language, beautifully crafted, skills apparent in her pieces about the weather and cafes.

Closing the first half was Bobby Parker, a poet rightly making waves on the circuit. His journeys into the dark side are in the traditions of Hunter S Thompson and Lou Reed with “Heroin Lullaby” his defining piece. 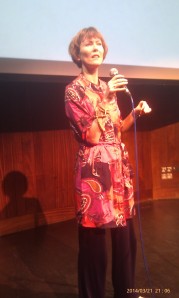 Opening the second half was Smooth FM Drive Time DJ Charlie Jordan, whose effortless poise is honed from years of effort and whose relationship poetry tugs at the heart. 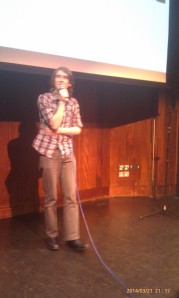 Ddotti Bluebell performs from the heart, her authentic tales of Afro-Caribbean life wry, touching and joyful.

Boxer and poet Matt Man Windle closed the evening looking as physically lean as I have ever seen him, as was his poetry, sinewy, angular and effective, a knock-out.

The entire evening was an unqualified success whose diversity of performer and performance was pretty much perfect, there was something for everyone, and an event certainly worth repeating.