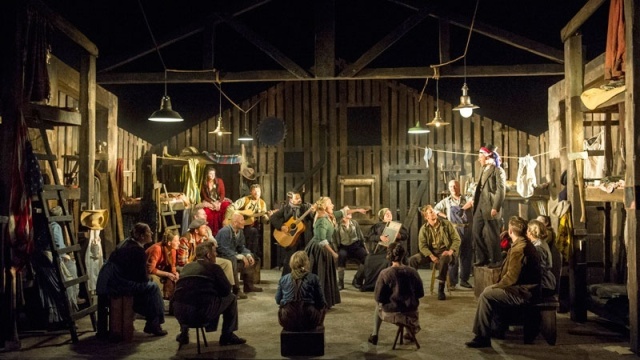 This bold revival of a seldom performed and relatively obscure operetta was the second offering from the English National Opera during their stay in Wolverhampton, the safer “Magic Flute” having been well despatched the night before. Paul Bunyan, by Benjamin Britten, dates from 1941, when the then 27-year-old composer was still in his self-imposed American exile and was revised by Britten in 1976. The story is based on the folkloric American lumberjack, Paul Bunyan, with the music incorporating a variety of American styles, including folk songs, blues and hymns. Stylistically it has much more in common with contemporary Broadway musicals than traditional opera, those familiar with Kurt Weil and Rodgers and Hammerstein will find this easy listening.

Its unique feature is a libretto by poet WH Auden which is lyrical, awkward and silly , sometimes descending into doggerel, all at once. Some of the rhymes are so outrageous that you wonder whether Auden was joking with Britten . The men fell out after the project, and the satire on America in general was not popular at the time. The narrative has no dramatic pace and its allegorical style defies zip,the dramatic highlight is the resignation of the two chefs when asked to vary their bean heavy fare. However the music is a joy, and the episodic nature of the scenes offers much comedy and pathos for the actors to develop. The myth of Paul Bunyan, logger made good, epitome of the American dream, and “America is what you make it” feels clunky and clumsy, but the production succeeds on the soaring score and deft acting characterisations.

Paul Bunyan himself is the disembodied off stage voice of a recorded Damian Lewis, but it is the company which shines with numerous impressive acting and vocal cameos. Anna Fleischle’s single set is a large barn with weathered timber , tiered bunks along the side, and lumberjack paraphernalia scattered about imaginatively lit by Guy Hoare whose fondness for white light and lamps is starkly evident.This is an ensemble piece with an exuberant cast. The love-affair between Tiny (Caryl Hughes) and Slim (Ashley Catling) convinces and the cooks are a scream in a warm production of homespun charm.

Tiny’s Act I song “Whether the sun shine upon children playing” is the undoubted musical highlight of the first half. Conductor Philip Sunderland , and his players, clearly enjoy making the most of an effervescent score awash with brio and light and Director Liam Steele ekes maximum dramatic effect from the numbers he neatly manoeuvres around stage.

Paul Bunyan continues on tour with The Magic Flute till May.