This was the first night of an English Touring Opera double offering ,with Paul Bunyan to come on the following night. The Magic Flute is an opera in two acts by Wolfgang Amadeus Mozart set to a German libretto by Emanuel Schikaneder but sung here in English as a singspiel, including both singing and spoken dialogue ,using Jeremy Sams’ English version of the libretto .The work premiered in 1791 in Vienna. Its survival and prospering over the proceeding 223 years is testament to its enduring qualities.

The story combines a fairy tale adventure as light and engaging as a Disney tale, with a darker underbelly, that ,in this production, is understated. Material and moral values clash and we are treated to a battle of the sexes 18th century style still recognisable today, but the racism, and Freemasonry power plays are less evident in Director Liam Steele’s production, increasing its accessiblity for a modern audience, but stripping it of some original intent. Villain Monostatos (Stuart Haycock) was dark faced, but his ethnicity was ambiguous.

Steele’s choreography skills are the hallmark of this production in which on stage movement ebbs and flows delightfully. An imaginative single set, on three tiers, courtesy of Chloe Lamford, impresses from the curtain up, as does the lavish costume which is classic rather than period specific. Doors and a video screen , animated by Matt Spencer, ensure that the limitations of the single set are more than compensated for, achieved in no small part by Guy Hoare’s white light lighting with lampshades!

Vocally the opera demands comic, and virtuoso, skills for the likes of Papageno, played by Wyn Pencarreg who steals the show , and the Queen of the Night, played by Laure Meloy. Meloy’s “Der Hölle Rache kocht in meinem Herzen” (“The vengeance of Hell boils in my heart”) reached an astonishingly high F6 with ease. Her first entrance is stunning with her voluminous silver-blue cloak filling the stage and gently fluttering during her aria. 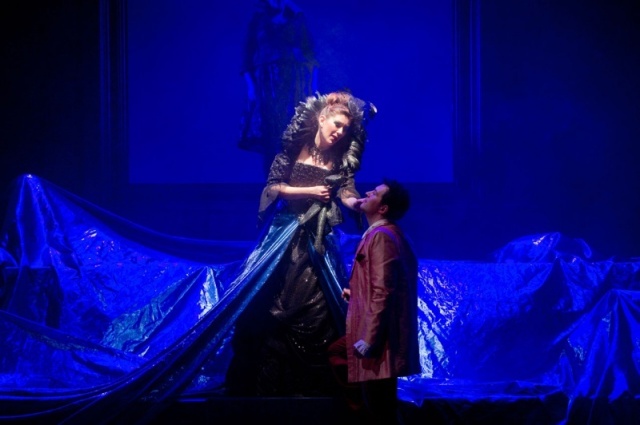 On stage chemistry is a difficult alchemy, but Nicholas Sharratt (Tamino) and Anna Patalong ( Pamina) achieved that, Sharratt’s melifluous tenor is warm, Patalong boils with sex appeal, and her Ach, ich fuhl’s was sublime. Evil sorcerer Sarastro(Andrew Slater) also delivers with his bass which includes a conspicuous F in a few locations. A modest, but strong orchestra was ably led by Michael Rosewell, although his accented tempi were occasonally excessive and the strings seemed underpowered for the grand moments.

A tremendous production, Paul Bunyan plays on Tuesday 18th, then continues on tour nationwide till May, http://englishtouringopera.org.uk/productions/the-magic-flute14