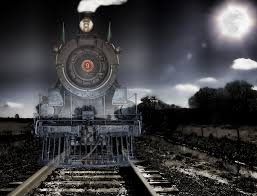 Written in 1923, Ghost Train enjoyed significant commercial success playing to packed houses at St Martin’s Theatre London from November 1925 to March 1927, and has been reworked several times for the cinema. The author, Arnold Ridley, is better known for his acting role as Private Godfrey in Dads Army but this neat period piece is well worthy of revival by the talented Sutton Arts Theatre group.

Although ostensibly in the thriller/chiller genre’s, there is a strong comic element to this production. Teddy Deakin, played as a camp dandy by Dexter Whitehead provides the energy , but Myra Mitchell’s portrayal of the batty Miss Bourne steals the show for laughs. The dialogue is more P.G. Woodhouse than Downton Abbey, with the cast sticking to their accents admirably, but the language has not worn well , the frequent use of the word beastly to describe anything unpleasant sounding uncomfortably affected to 21st century ears.

The single set of a train waiting room works well, the sound and lighting effects adding mystery and credibility to proceedings thanks to Stage Director John Islip. Costume was well chosen, with the women properly behatted , and dressed appropriately for a railway journey, and the men soberly attired with the exception of the flamboyant Teddy Deakin.

As the curtains open the protagonists are introduced one by one. Dick Kemp is a wonderfully gnarled weather –worn station master telling tales of woe and foreboding. Warring middle aged couple the Winthrops are played by Ian Cornock and Suzy Donnelly, the latter of whom has some fine feminist lines, the sentiments of which are rather undermined by subsequent events. Newlyweds the Murdochs, Joseph Hicklin and Michelle Dawes, draw the maximum out of two underwritten roles while Christina Peak as Julia Price has great fun with her dramatic appearance and role. They are all stranded at a remote Cornish station after Teddy Deakin delays their train by pulling the communication cord causing them to miss their connection leaving them at the mercy of a ghost train, harbinger of death and destruction.

Recreating the sense of mystery and suspense that original audiences would have experienced is no easy task ninety years later, and Director Patrick Richmond – Ward beefs up the comedy in counterbalance .Dexter Whitehead admirably drives the ribaldry on stage, but sometimes the production could have been confident enough to slow things down a little bit to help with the suspense. That speed was particularly noticeable in a second act of barely half an hour.

Social commentary as played out by period scripts fascinates. Elsie Winthrop bemoans the caveman machismo of her husband, then leaps into his arms as quickly as Wilma runs to Fred in The Flintstones when the going becomes rough. Frippery and self-indulgence are condemned in the responses of dandy Teddy Deakin’s co-travellers. Eccentric spinster Miss Bourne is indulged, and looked after. She worries of what the Vicar would think if she broke her vow of abstinence to take some brandy to dull the shock of the evening’s events, no doubt echoing the sentiments of a post WW1 generation who acknowledged the benefits of austerity and sacrifice, but wanted to let their hair down once in a while too.

Tradition demands that such a play takes a dramatic twist, and Ghost Train does not disappoint with a false ending thrown in too. Although Miss Bourne sleeps through half of the production under the influence of brandy the audience do not with strong ensemble contributions from the entire cast. Ghost Train runs from Thursday 24th October to Saturday 2nd November.

This entry was posted in Behind the Arras Reviews and tagged arnold ridley, dads army, private godfrey, Sutton Arts Theatre. Bookmark the permalink.