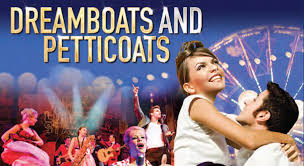 Dreamboats and Petticoats revels in nostalgia, swirling skirts, slicked hair and great music. A jukebox musical, the song and dance are linked by a narrative set in 1961, at St Mungo’s youth club in Essex. Song writing hopefuls Bobby and Norman compete to win a national song writing contest and to win the heart of Sue ,the youth club belle, providing ample excuse to roll out some forty two of the finest songs of the late 50’s and early 60’s. But Laura is the star as the talented “plain jane” who comes good.The on stage live band adds to the sense of “being there” prompting the audience’s toes to tap, mouths to hum, and finally feet to dance .

The secret of the show’s success is to play out the eternal hope of youth and romance to a cross- generational audience of pensioners, their children, and their children’s children, brought to life by a vibrant cast . Bobby is played by Stephen Rolley , Mathew Colthard takes the role of Norman, while love interest Sue is played by the sassy Louise Olley. Mark Wynter, who made his professional debut as a recording artists in the 1960s, takes on the role of the youth club leader, and finishes the show singing a few of his own hits, much to the delight of the audience, with enviable energy and pizzazz.

Forged originally on the back of a compilation album, writers Laurence Marks and Maurice Gran can hardly go wrong with classics from , Roy Orbison, Eddie Cochran, and Billy Fury, to name a few, including ; Let’s Dance, To Know Him Is To Love Him, Shaking All Over, Bobby’s Girl, Runaround Sue, Let It Be Me, Happy Birthday Sweet 16, The Great Pretender, C’mon Everybody, Only Sixteen, and Let’s Twist Again. Marks and Gran are the team behind Goodnight Sweetheart, Birds of a Feather, The New Statesman and Shine On Harvey Moon, men with a track record of understanding what the public want and like . The script is laced with humour, the defenestration of Sue being memorably proceeded by the line, ” There goes my baby………!” Production is by Bill Kenwright and Laurie Mansfield in association with Universal Music.

The show does not aspire to the narrative completeness of Mama Mia, or the conceit of We Will Rock You. Instead it borrows from the success of Buddy!, presenting catchy ,simple, enduring chart hit music in live concert form without being constrained by an individual artist. The singing is of a consistently high standard from a vocally strong and versatile cast. Hannah Boyce’s ” To Know Him is to Love Him” is outstanding, the two ensemble acapella pieces are a joy, particularly “Poetry in Motion”. Carole Todd’s choreography is sharp, colourful and effervescent throughout.

No-one can fail to emerge from this show without a smile on their face, a warm glow inside, and a familiar lyric on their tongues.

Dreamboats and Petticoats plays at the Wolverhampton Grand Theatre, from Monday September 16th to Sat 21st