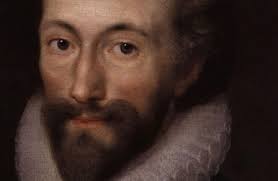 Donne rightly enjoys a position amongst the poetic greats of the English language. The 2nd April, the day of this event ,was the 400th anniversary of Donne’s celebrated poem Good Friday, 1613, Riding Westward, reputedly inspired by his visit to Polesworth. Beyond Shakespeare, we do not do enough to celebrate our literary heritage, so this day was particularly welcome.The established links between Polesworth and Donne served to give the day an unique sense of time and place. Donne wrote his poem in a letter to his friend, Sir Henry Goodere, who was then the landowner of Polesworth Hall – which became Polesworth Vicarage in the 1930s.

The turn- out was distinctly A team with a distinguished team of local academics and an eminent audience, there were several intriguing moments as both tested each others’ poetic credentials. The speakers comprised Dr Anthony Mellors, Dr Anthony Howe, and Dr Gregory Leadbetter all of whom hold positions at Birmingham City University, each with diverse and illuminating insights into Donne and his poetry.A walk mid session along the pPlesworth Poetry Trail, lead by, and brainchild of, Mal Dewhirst, was a reminder of the ongoing capacity of Polesworth to inspire, and produce, great poetry to this very day.

Perhaps the most satisfying aspect of the session was the unanimity between the speakers that Donne, and Good Friday, 1613, Riding Westward , was “difficult” poetry ,a comforting message for mere mortals. Fr Phillip was also present to offer a spiritual interpretation sometimes as counterpoint to a strict literary view.

Good Friday, 1613. Riding Westward
By John Donne 1572–1631 John Donne
Let mans Soule be a Spheare, and then, in this,
The intelligence that moves, devotion is,
And as the other Spheares, by being growne
Subject to forraigne motion, lose their owne,
And being by others hurried every day,
Scarce in a yeare their naturall forme obey:
Pleasure or businesse, so, our Soules admit
For their first mover, and are whirld by it.
Hence is’t, that I am carryed towards the West
This day, when my Soules forme bends toward the East.
There I should see a Sunne, by rising set,
And by that setting endlesse day beget;
But that Christ on this Crosse, did rise and fall,
Sinne had eternally benighted all.
Yet dare I’almost be glad, I do not see
That spectacle of too much weight for mee.
Who sees Gods face, that is selfe life, must dye;
What a death were it then to see God dye?
It made his owne Lieutenant Nature shrinke,
It made his footstoole crack, and the Sunne winke.
Could I behold those hands which span the Poles,
And tune all spheares at once peirc’d with those holes?
Could I behold that endlesse height which is
Zenith to us, and our Antipodes,
Humbled below us? or that blood which is
The seat of all our Soules, if not of his,
Made durt of dust, or that flesh which was worne
By God, for his apparell, rag’d, and torne?
If on these things I durst not looke, durst I
Upon his miserable mother cast mine eye,
Who was Gods partner here, and furnish’d thus
Halfe of that Sacrifice, which ransom’d us?
Though these things, as I ride, be from mine eye,
They’are present yet unto my memory,
For that looks towards them; and thou look’st towards mee,
O Saviour, as thou hang’st upon the tree;
I turne my backe to thee, but to receive
Corrections, till thy mercies bid thee leave.
O thinke mee worth thine anger, punish mee,
Burne off my rusts, and my deformity,
Restore thine Image, so much, by thy grace,
That thou may’st know mee, and I’ll turne my face.

The TLS summarises the significance of the poem admirably as follows:

Friday, March 29, 2013, marks 400 years since the composition of one of John Donne’s most important and enduringly popular poems, “Goodfriday, 1613. Riding Westwards” (among the many variant titles existing in manuscript, this is the one printed in the first edition of Donne’s poetry, 1633). The poem, one of a small number by Donne which can be dated, records an intense religious meditation at a crucial turning point in the author’s life – and, by extension, in the intellectual history of early modern England. Born into a dangerously devout Catholic family in a time of heightened religious sensitivity, Donne eventually joined the Church of England and became one of the most celebrated preachers of his day. A daringly controversial erotic poet whose scandalous marriage cost him a promising secular career, he ended his life as Dean of St Paul’s Cathedral, a moral compass for the nation.

Although we must always remain wary of conflating Donne with the speakers of his poems, it it certainly suggestive that this 42-line poem, conceived as Donne entered his 42nd year, was written at exactly the time Donne made his decision to take orders, in spring 1613. (After overcoming many “distractions or diversions” cast in his path, he was eventually ordained in 1615.) The poem was probably composed on a journey which saw Donne visit Sir Edward Herbert at Montgomery Castle in Wales, and Sir Henry Goodere in Polesworth, Warwickshire. Following his return he announced his “resolution of a new course of life and new profession” – divinity.

As in so much of Donne’s devotional verse, “Goodfriday” is structured around a “collision of the liturgy with the ego”, as Kirsten Stirling has put it. The speaker expresses guilt about travelling west on the day commemorating Christ’s crucifixion in the east, fulfilling personal obligations when he ought to be performing religious duties. However, awed by his contemplation of the crucifixion he reasons that he is facing the right way, and the direction of travel therefore directly enables the poem’s devotional climax.

First, the poem explores the overwhelming nature of the crucifixion vision itself. To witness God’s death on earth would lead to a kind of paradoxical death difficult even to imagine (and Donne rhymes “dye” with “dye” at this point to powerful effect). How could a human being behold hands which could encompass infinity, or comprehend the “endlesse height” of heaven “Humbled below”? Given these visual impossibilities, the back of the head – said by Galen to be the seat of the memory – offers the more appropriate means of contemplation.

Alongside these misgivings, the speaker also begins to fear that his own inner worth is inadequate to approach God. He begins by asking ‘Could I’ in lines 21 and 23, a question with logical implications. Via “durt” and “dust” this becomes the deeply psychological question “durst I” by line 29, as the speaker, realizing that Christ’s gaze is on him, doubts his own worthiness even to receive God’s corrections. Having his back turned to God allows the speaker to be scourged: “Burne off my rusts, and my deformity”. As in so many of Donne’s Holy Sonnets, the poem concludes with a call for urgent, violent transformation. Yet unlike those poems, with their desperate dependence on God’s agency, the final action of “Goodfriday”, harmonizing with “thy grace”, is initiated by the speaker: “I’ll turne my face.”
* In 1613, Good Friday fell on April 2. On April 2, 2013, a celebration will be held at Polesworth Abbey, which will include new poetry specially commissioned for the occasion.