Winter is my favourite time ,
Otherwise I just melt away into the background,
And although I am always a little tubby in the middle
And can never see my feet, it’s neat
Being a Snowman.

It’s just the way I am made, it’s genetic you see,
Just down to tradition ,
Not the Maccy D,
Or whiskey,
I’m strictly water only.

I always dread the placement of the carrot.
It should be for my nose, but just suppose
They put it somewhere else……………
It causes particular embarrassment you know,
If they choose to put a baby carrot, well , “down below”.

As for my dressing, well I wish I could modernise
Get Gok wan in perhaps,
But when the cry goes out “accessorize”
All I get is a scarf, a hat, and maybe some coals for eyes.
It’s not very chic ,in any sort of guise.
Sunglasses are a bad omen, for too much sun
Makes my complexion begin to run,
Resulting in my demise, then, that’s your lot,
All that’s left of me on your grass, a sorry white blot. 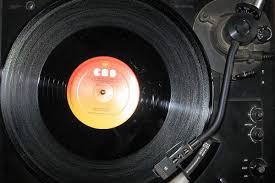 And when those remembered sounds come , what do we hear
Instruments, chords, voices and arrangements
Or faces and places parties and engagements
I heard funky weekend last night drifting ,teasing calling
And I at once remembered Keith’s drunken caterwauling
Of the same song
Almost forty years ago
It does that to you, one tune, a thousand memories

The album cover was as big as a coffee table book
We would gaze, stare and look,
(Sometimes it was used for a coffee table, If we didn’t like it)
At the artwork, the credits, who was in the band
Those in the studio who had given a helping hand
Then there were lyric sheets to help you read along
So you could sing out aloud, before you even knew the song,
And couldn’t get the words wrong, because they were there, in front of you

When they were not, you were in trouble, I worried for some time about Bonnie Tylers’ breakfast problems with her hard egg.

The vinyl was tangible. It was big. It was circular. It felt complete.
You started on the outer groove, and twenty minutes later you knew it had finished – by a scraping, booming noise
You had no choice
But to get up and – turn it over
Unless you wanted to skip tracks, which was usually unwise
As to do so you needed the eyes
Of a wartime precision bomb aimer
Able to release the needle ,with finger and thumb, over exactly the right point over a moving target travelling at 33 and a third revs per minute

Sometimes the boom of impact was followed by a reassuring silence
Other times there was the embarrassment of missing the intro, or worse still the dying chords of the previous song, or even worse still, you had counted the wrong number of wide grooves and you would have to turn around for another sortie
To hear your desired melody.

But like the Dambusters, like 633 squadron, like Guy Gibson, the elite got it right, first time.
It was rumoured that by playing certain Ozzy Osbourne records backwards there were secret messages from hell
But with Ozzy, forwards, or backwards, it was difficult to tell.
You could buy them anywhere as well
Newsagents, Woolworths, Debenhams and Boots,
All stocked Toots , and the Maytalls, their back catalogues in full,
There was no supermarket cull ,of just the top 20
With listening booths for youths, where you could ask to hear a song first
To enliven your thirst,
For what was new, or just because you wanted to hear it
Which is what I used to do,

It didn’t need to make sense either, Jethro Tull were thick as a brick
Genesis had the Trick,
Of the tail
Tales from topographical oceans was a window on an unseen world
Zeppelin’s stairway hurled
You into another place, carried by John Paul Jones bass

A damsel with a dulcimer in a vision once i saw
It was an Abyssinian maid
And on her dulcimer she played, singing of Mount Abora
Could I revive within me
Her symphony and song,
To such a deep delight ‘twould win me
That with music loud and long
I would build that dome in air,
That sunny dome! Where Frankie said “Relax”
Just do it, they were the facts
Those caves which Foreigner told, were cold, as ice!
And all who heard should see them there,
And all should cry, Beware! Beware!
Plants flashing eyes, his floating hair!
Weave a circle round him thrice,
And close your eyes with holy dread,
For we on honey-dew hath fed
And drunk the milk of Paradise City
Where the grass was green, and the girls were pretty,
Where the Doors of perception open to allow the crystal ship
To sail every day from an internet you tube clip

This entry was posted in Poems. Bookmark the permalink.

3 Responses to The Snowman’s Lament