Posted on September 8, 2012 by garylongden 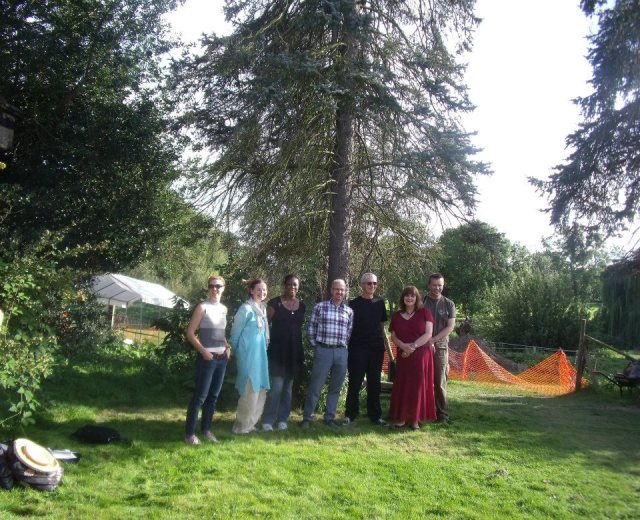 “What is poetry?” is a question beloved of teachers, lecturers and workshop leaders. It invariably elicits a myriad responses , each one a little less sure than the one just offered. It lies all around us in different forms, guises, and disguises. A great goal at football is sometimes described as poetry, maybe a pop lyric, maybe a line from Tennyson. You know it when you see it, or hear it. It was certainly alive at Polesworth Abbey on Saturday afternoon.

On arrival I was greeted by Fr Philip in full clerical robe and high viz jacket, frankly, you can’t carry much more authority than that. On a blazing late summer’s day The Abbey and grounds were packed with a mixture of crowds who had spilled over from the village carnival, and the many who had come to see the archaeological dig on its final weekend and listen to the poetry, which had been written as a parallel project.

It was a testimony to the emotional commitment that the poetry workshop leaders had to “Dig the Poetry” that all returned to see the climax and denouement of everyone’s efforts. David Calcutt, Jenny Hope, Matt Merritt, Jacqui Rowe, Maeve Clarke, Jo Bell and organiser Mal Dewhirst performed work they had written , as well as bask in the glow of appreciating work which their workshops had inspired. Furthermore, the omnipresent Tim Upson Smith, community archaeologist and tour leader, decided to unleash his own poetry , a clever take on the classification of soil types to show that there was more to him than a shiny trowel and an Indiana Jones inspired hat.

In the grounds, period displays of tile making, stone masonry and medieval firearms engaged a throng soaking up the sun and the atmosphere. Children gambolled, ladies wore floppy hats, and men wore unwise shorts – this is England. It was the dig which had inspired the poetry and it was wholly appropriate that the performance should have been held al fresco with the sights that had inspired the words all around us. Sat down on the lush grass the spoil heaps of disinterred earth overlooked an audience that was part of the physical and poetic landscape.

Thus, for ninty minutes an egalitarian procession of performance unfolded telling the rich story of the dig ,and the responses which it had evoked in the poets. David Calcutt captured the volksseele of the summer with Dig, its opening lines:

“And we are on our knees,
Faces close to the ground,
With earthworms”

an archaeological call to arms, as we surveyed the spoil soil and trenches around us. The eternally neanimporhic Jo Bell closed the day with her customary assured poetic spezzatura. Her poem ,Last, considering what will be left of us after we die, assuming an ethereal spiritual dimension in the shadow of the thousand year old Abbey.In between, a wonderful array of ordinary poets offering extraordinary responses to their surroundings over two months, entertained and enthralled.

“What is poetry?” it lies all around us in different forms.