I am fond of seeing Shakespeare performed in public houses as it recreates the milieu in which the plays would originally have been performed. The Lamp Tavern itself is an old, characterful , intimate, backstreet place, in which you bump into the end of the bar as you enter ,and is still a drinkers pub, complete with the odd regular having a snooze in the corner. The performance itself was in a back bar with modest raised stage. On the walls fading prints of Victorian performers and characters keep watch, partly illuminated by a stained glass, leaded light ceiling dome, through whose opaque glass and grime the evening light struggled to penetrate.

This production was the work of Worcester based Melting Pot Theatre Company. Staging Hamlet is laden with risks and rewards. Amongst the best known English language plays of all time, there is no danger that the audience will not know the credentials of the play, or be unfamiliar with the plot. However that very familiarity carries risk. Most of those watching will have seen many other productions and performances to compare against, and the words will often be mimed by the audience as fervently as fans many sing the words to well known songs at a pop concert – don’t fluff the lines! Therefore the challenge is either to produce the greatest performance of Hamlet of all time, or to reinvent the staging. The smart choice is to go for the latter, which is what Melting Pot wisely decided to do. And if ever there was a play which Behind the Arras should be reviewing, it is Hamlet!

So, what was the twist? The full dramatis personae tops twenty players, Melting Pot managed with seven, comprising five women and two men. All male characters other than Hamlet and King Claudius ( and the ghost) were played by women. As in the setting, this was a device which echoed the practicalities of theatre in Elizabethan times in which men playing women was a common theatrical device, to comic effect in comedies.

Scenery was nil, props minimal and costumes functional, but all very effective. Lighting was just two white light spots. It worked. No distractions, just the players and the play. The overall costuming was unisex black ,boots, trousers and shirts for all. It is to the company’s enormous credit that the women who were playing male and female roles did not seek to establish gender by slipping on/ taking off a skirt or shift dress. Instead they acted their gender, and did it very well. 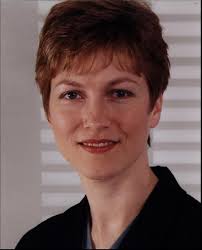 The surprise of the night was Susan Doran as Polonius. Being neither old, nor male, was no obstacle to her. Instead she created a compelling humanity for him, with no little humour. Not only did I quickly forget that the part was being played by a woman, I quickly started to rack my brains for a more inspired interpretation of the character. Amanda Bonnick, as Laertes also gave a fine nuanced performance as an initially balanced young man driven to revenge. That both Susan and Amanda defined their masculinity by subtle body language, rather than faux deep voices, was a tribute to their acting skills.

Jenny Stokes and Philip Ward were a convincing Queen Gertrude and King Claudius, solid anchors around which the rest of the cast bobbed. Their coquettish and lascivious entrance was a delight. As Ophelia, Holly Jeffrey was both beautiful and vulnerable, as Osric, she also offered a evidence in the vignette that she too could play a man along with the best. Janet Bright played the tricky part of Horatio with great care. Horatio is omnipresent in the play, doesn’t say much, but is a crucial part in the mechanics of the story as Hamlet’s best friend. Wisely, she determined to enjoy the role and savour her lines – as the audience did.

Prince Hamlet was played by Mathew Brockington in neurotic, understated fashion. Hamlet’s descent into madness was well charted, the eternal question of when he was mad, and when he was feigning madness ,underscored by a teasing ambivalence to his portrayal. No Shakespearean character has better soliloquies than the Prince, the challenge of performing them is daunting for any actor. The defining moment of his Hamlet, when the words and his performance converged, arrived in the “ Alas poor Yorick” soliloquy, a meditation on the fragility of life which transcends time, his delivery lit up the room.

This ambitious production succeeds admirably in re-imagining Hamlet , and teasing new life out of it, by the gender play in its casting. Nowhere was this more evident than in the Gravediggers Scene, in which Susan Doran and Jenny Stokes donned flat caps and replaced earrings for pencils behind their ears to perform in rousing comic and hugely enjoyable style. This production will tour again later in the year, for more information on the company : http://www.meltingpottheatre.co.uk/

For more information on the production: http://trappingsandsuits.blogspot.co.uk/