One of the pleasures of spoken word events is that you are never quite sure what you are going to hear when you turn up. This was no exception. The relationship between lyrics and poetry over the years has been an uneasy one. Great songs and albums have frequently been underscored with lyrics which were either aural filler, or pretentious nonsense, with some honourable exceptions. Local poet and film director Mal Dewhirst has turned his attentions to Pink Floyd’s “The Wall” album, and a fascinating project it is. 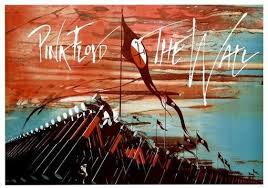 The history of the The Wall is one of bloated rock star paranoia and excess . On their 1977 tour Pink Floyd took exception to the behaviour of some of the very fans on their tour who had helped to make them multimillionaire superstars , with Roger Waters suggesting that they build a wall to cut themselves off from the troublesome oiks, prompting him to write an album on just that theme. Although commercially a huge success, the album has not worn well, with the exception of Comfortably Numb and Another Brick in the Wall. Mal has resolved to make good Water’s lyrical shortcomings for a production of the show in Tamworth this summer by rewriting some of them. The project, titled The Wall, is based on the Pink Floyd rock opus and will be held at Tamworth Assembly Rooms from June 5-8. Tonight he debuted The Thin Ice, and a very good job he made of it too. I await the results of the remainder of the much needed redrafting with great interest. Whether he will turn his directorial skills to improve on Alan Parker ‘s film is, as yet ,unconfirmed.

Jarvis Cocker has recently moved from intelligent lyricist to published poet with his new Faber published collection. The rise of Poetronica may yet see the burgeoning contemporary spoken word scene bite back into the world of contemporary lyricists who seem to have given up political fight, eschew word play ,and trawl the lowest common denominator for effect. There are some great new mainstream lyricists out there, Matt Berninger (The National),James Mercer (The Shins), Devendra Banhart to name but three, and in England we have a great tradition of lyricists stretching back through Damon Albarn, Neil Tennant, Elvis Costello, Ray Davies to Cole Porter. But maybe a new project might be to rewrite the lyrics for some classic songs? Maybe Mal is onto something here?

It is not as outlandish a concept as it may seem. 19th century hymn writers did it all the time. Great melody- shame about the words, and pen in hand they thought nothing of writing something better. Why shouldn’t we do the same? Patti Smith redrafted Bruce Springsteen’s “ Because the Night” to great effect. Perhaps the surprise is that it has not been done more – until now…………………..

Unusual poetic inspiration was a feature of the night. Tom Wyre drew upon Dickens for an ambitious themed list poem, Peter Costelloe opted for 19th century bull-running in Tutbury. Bert Flitcroft is a dapper urbane sophisticate who turned his poetic sights upon road rage on the M42 in unlikely, but amusing and accomplished form. Fresh from her success at Bilston Voices, Janet Jenkins name-checked Birmingham Art Gallery, which Mal had also used for inspiration, and Lichfield Cathedral, which Dea Costelloe had in turn based a poem upon.

Ray and Teri Jolland are a Spoken Worlds institution for heir comedy sketches, and they did not let us down this month with Its All an Act. It was good to hear host and organiser Gary Carr read some of his own material, his line “Every mirror taunts with its own veracity” the most memorable of the evening. As an experiment , proceedings were audio recorded for the evening ,providing a useful archive for future use.