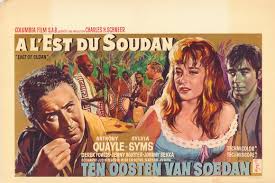 Judging this film forty eight years after release requires some care. In 1964 it pandered to the escapism that cinema goers still relished, echoed days of colonial glory which were rapidly fading and offered a glimpse of the exotic before foreign travel and mass television made it accessible. The core triumvirate of actors, Anthony Quayle, Sylvia Syms and Derek Fowlds are strong supported by child star Jenny Agutter.

Chaos in Sudan is not new to 21st century audiences as Quayle does battle with Dervish hordes from the 19th century. The plot is a formulaic one, Quayle as Private Baker escapes a native assault and helps the upmarket Simms to escape. This provides for chase sequences and encounters with various wild animals including snakes, rhinos and elephants – it’s pretty much like walking though a zoo.

The problem is that not only is the plot formulaic and laborious, but the sets are studio ones, with excessive use of archive and stock footage (some from The Four Feathers)that require considerable suspension of disbelief. As a drama it fails. As entertainment at the time, it probably did the job. Quayle was a massive star at the time with HMS Defiant, The Guns of Navarone, and Lawrence of Arabia under his belt when he made the film, Sylvia Syms was an established love interest and has had a distinguished career which has lasted till this day, most recently as the Queen Mother in The Queen. Fowlds went on to considerable television success in Yes Minister and Heartbeat. Director Nathan Juran had a solid but unspectacular career having some success with sci-fi movies but also trying his hand at Western’s and fantasy with Sinbad. There is nothing in his work on this film which is of note.

This entry was posted in Films. Bookmark the permalink.